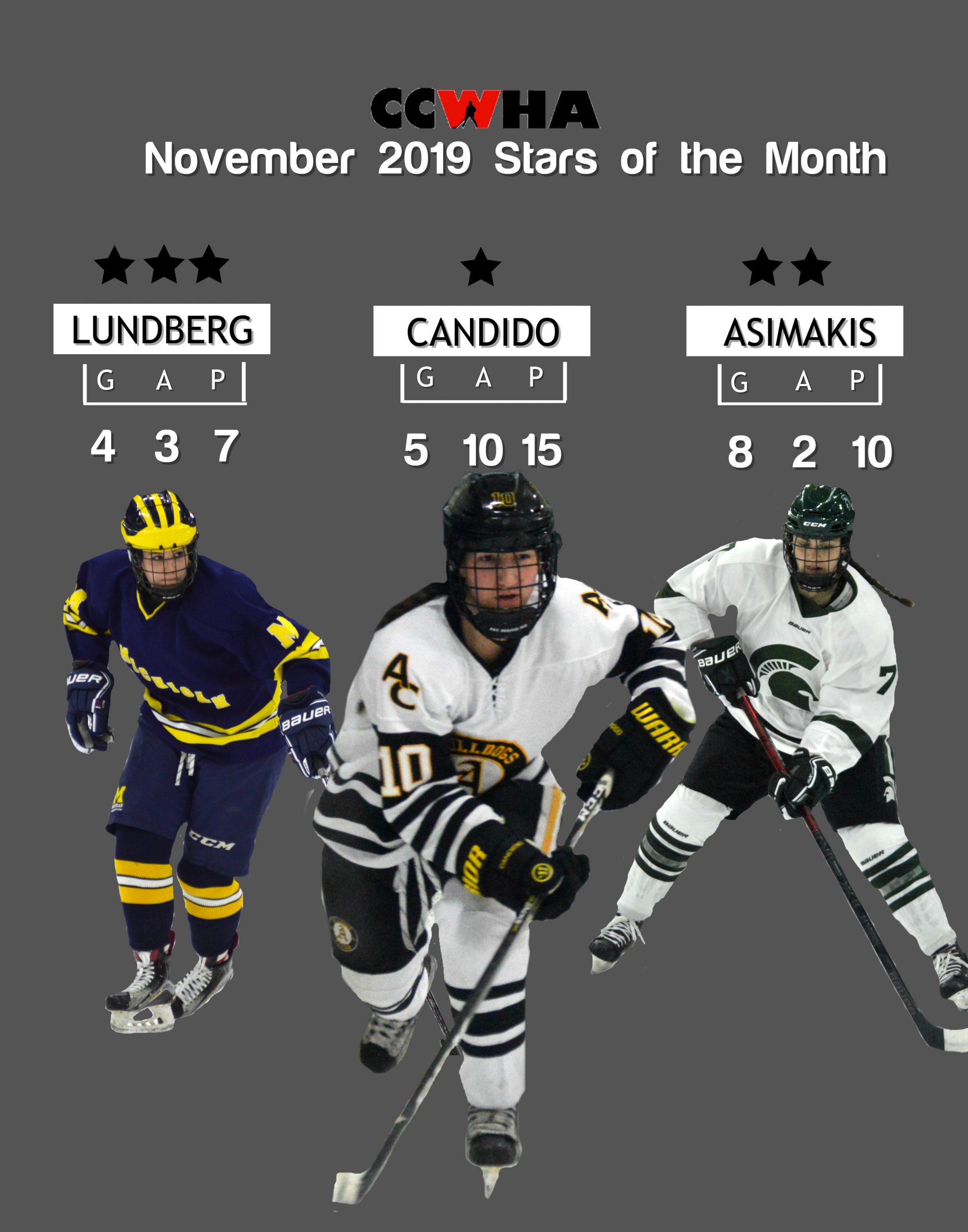 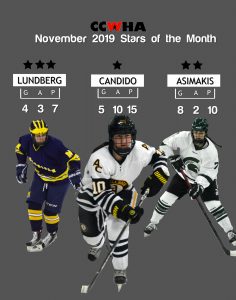 The University of Michigan’s Taylor Lundberg has earned the third star for the eleventh month of the year. With six games under her belt during the month, Lundberg tallied seven points (4g, 3a) for the Wolverines. To begin the month, the forward put up three assists in the opening game of the series against Robert Morris, with a 7-5 loss for Michigan. In game two, with an 8-1 win, Lundberg found the back of the net once against the Eagles. The maize and blue went on to play the newly founded team, Concordia University, where they would go on to win 5-0 while Lundberg grabbed a single goal in the second win of the month. In the final game of the month for Michigan, the junior would put up the only two Wolverine goals in the 6-2 loss to the University of Colorado. Lundberg currently leads Michigan with 10 points (5g, 5a).

November’s second star of the month is sent over to Michigan State University’s Natalia Asimakis. The Spartan forward put up 10 points (8g, 2a) in just four games during the month of November. In an 8-0 win over Aquinas College, the sophomore transfer recorded two goals and an assist. A single assist in an 11-1 win against Davenport University would lead into a four goal game in the 10-0 win over Aquinas for Asimakis. The green and white would finish out November with a 4-2 win against Davenport where Asimakis would find two more goals. Currently, the forward has played 10 games for Michigan State and put up 21 points (12g, 9a).

The first star for the month of November is snagged by Adrian College’s Tanya Candido. The junior played eight games for the Bulldogs during November and has racked up 15 points (5g, 10a). During the series with Miami University the defenseman recorded a goal and three assists in the sweep of the Redhawks. Adrian then went on to take down Arizona State in a single game 5-0 win, where Candido put in two of the five goals. The following weekend in the series against McKendree University, Candido would find four assists collectively in the 4-3 win and 2-0 loss. The junior would then grab two more points in a single game with Lindenwood-Belleville before the final weekend of November. Grand Valley would be the last opponent during the eleventh month for Adrian College. During the second sweep of the month, Candido would tally three points (1g, 2a) in the 11-0 win number one, and two assists in the 8-1 second win. Currently, Candido has 18 points (6g, 12a) for the Bulldogs in 12 games.