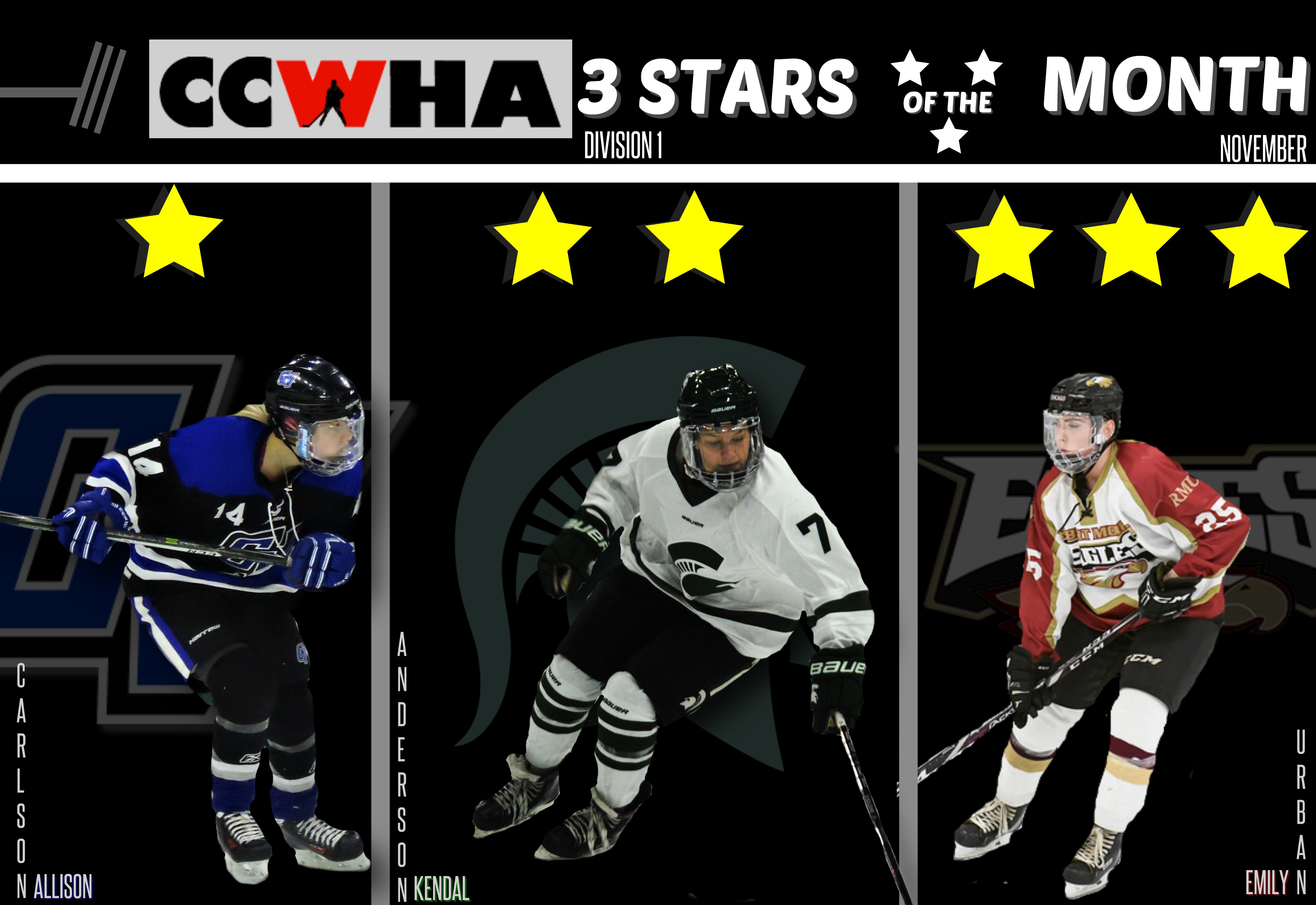 Urban, Anderson and Carlson Earn November Stars Of The Month

The month of November held many games for the Central Collegiate Women’s Hockey Association teams. Throughout the month, many players shined bright, but three players stood out the most. These three standout players, from various CCWHA teams, have been named the November 2018 CCWHA Three Stars of the Month.

The third star of November 2018 goes to Robert Morris University’s, Emily Urban. In six games during the month, Urban collected 12 total points (3g, 9a). All games with points earned by the junior forward came during non-league games, and all points were collected in just four games. The Eagles took on newly minted ACHA team Concordia University, with Urban grabbing seven points (2g, 5a) in the 20-1 win and three points (1g, 2a) in the 13-1 win. McKendree University was the next opponent where Urban would strike again, once in the beginning of the month and once to end the month, where two assists were found during the two games, despite the Eagles recording two losses. Urban currently has 20 points (8g, 12a) and leads Robert Morris in assists so far this season.

Earning second star of the month honors is Michigan State University’s Kendal Anderson. The senior forward put up 12 points (7g, 5a) during the seven games played in November. During the Spartans’ trip to the East, Anderson would find points in all three non-league games played. Two goals in the win over Massachusetts, 4-3, two points (1g, 1a) in the 4-3 win over Rhode Island and a single assist in the second win over URI, 4-0. Anderson would tally two points (1g, 1a) in a 7-0 win over Davenport and three more points (1g, 2a) in a second win over the Panthers in a 15-3 win. The senior Spartan would finish out the month with two goals in a 5-2 non-league win over Minnesota. Anderson now has 18 total points (8g, 8a) and is the second leading scorer for Michigan State during the 2018-19 campaign.

The first star of the month of November is Grand Valley’s leading scorer, Allison Carlson. During the 10 games Carlson participated in for the Lakers during the eleventh month of the year, the senior forward put up 20 total points (10g, 10a). In the series against Lindenwood-Belleville to begin the month, Carlson tallied a single goal in the 3-1 win over the Lynx in the first of two games. The Lakers then ventured on a three game weekend, facing off against Grand Canyon University, and Midland University. Grand Valley would sweep the weekend, first completing two wins against Grand Canyon with 10-1 and 10-0 wins. Carlson would put up three points (1g, 2a) in the 10-0 win and five points (3g, 2a) in game two, gaining her first hat trick of the season. Two points (1g, 1a) would be found in the Lakers’ 3-2 win over Midland from number fourteen. With a second three game weekend during November, Grand Valley took on two games with Aquinas and a single game with Minnesota. In the two CCWHA league games against Aquinas, Carlson put up a total of seven points (3g, 4a) in the 6-0 and 7-1 wins. Grand Valley would find the win over Minnesota, while the senior Laker would tally an assist in the 2-1 take down. In the final game of November Grand Valley would take on the reigning National Champs, Liberty University. The Flames would get the win, but Carlson would find the back of the net for the lone goal in the 4-1 loss. Carlson now has 23 total points (10g, 13a) to continue leading the Lakers in points for 2018-19.