The 2017 CCWHA D1 Champions are the Miami University Redhawks! This is their 4th straight visit to the championship game and their 3rd win in 4 years. Congratulations Redhawks!

Sherine Diffendal would even the score 11:00 minutes into the second with a shot from the blue line on the power play. Alexis Smith with the assist on the power play goal. Grand Valley would come right back as Frankie Wojtylo put one in four minutes later with help from Karyn Schmaltz and Sally Hoerr, also on the power play. Alex Strohm of Michigan State would make it 3-3 with 0:10 left in the second period after a scrum in front of the net. Smith with the assist in the tying goal as well. Taylor Watson was in net for the Lakers, picking up 42 saves on 45 shots on net. Kathryn Hamer was in between the pipes for Michigan State as she made 20 saves on 23 shots on goal.

In the Saturday matchup, the Miami offense took off. Booth would begin the scoring for the night just 1:29 into the first period. Ellen Chiligris and Visalli would grab the assists on Booth’s first goal. At 13:46, still in the first, Booth would grab an unassisted goal to make it 2-0 over McKendree. With three to go in the first period of play, Kaley Mooney found open net to bring the lead to three before the first intermission. Ireland Mooney would get the assist on the third Miami goal. Caroline Noble would open things up to 4-0 at 7:46 into the second, with help from Natalie Hornbuckle. K. Mooney came back again to add her second goal of the night two minutes later after a pass from Kathleen Baldwin. Miami makes it a 6-0 game after Nicole Matthews adds on a goal of her own, from Peterson at the 12:34 mark in the third period. K. Mooney would tally her third goal of the game at 13:29 in the third after passes from I. Mooney and Matthews while on the powerplay. To close out the scoring at eight, Chiligris registered her second point of the night with help from Booth and Hanson. Wills was in net again, this time making 15 saves on 15 shots. Miami put up 43 total shots in the second game.

On Saturday, the Panthers couldn’t find the back of the net in response to Midland’s two goals. Ferguson was in net once again, making 19 saves on 21 shots on net. The Panthers threw 51 shots on the Midland net in the second game of the weekend.

Saturday’s matchup had the Redhawks playing from behind. Lindenwood would grab the first goal within the first five minutes of play, but Augustine answered right back, a powerplay goal. K. Mooney with the assist. LUB came fighting back however, this time with two unanswered goals, one to end the first period and another to begin the second. Sarah Peterson and I. Mooney rose up, however, and made it a 3-3 game with a whole period of hockey to play. Rachael Booth, for the second weekend in a row, would get a game-winning-goal. Izzy Smith, Goguen and K. Mooney (2) would register assists on the last three goals. The Redhawks shot 53 total shots in the second game, while Wills stopped 26 of 29 shots faced.

November CCWHA Players of the Month

END_OF_DOCUMENT_TOKEN_TO_BE_REPLACED

MIAMI/ROBERT MORRIS – The Redhawks of Miami took on the Eagles of Robert Morris this past weekend (Nov. 20/21), with the Redhawks escaping with a sweep, 5-1 and 3-1. Rachael Booth (3g), Ellen Chiligris (1g) and Caroline Noble tallied the Miami goals. Alyssa Visalli (1a), Morgan McGrath (1a), Izzy Smith (1a), Katie Augustine (1a) and Jessica Gould (2a) got the helpers. Emalee Wills was in net for Miami, grabbing the win with 20 saves from 21 shots on net. Robert Morris grabbed a single goal in the first game from Makaila Anderson while Kendra Gallaher registered 32 saves from 37 shots on net.

The second game of a 3-1 win saw goals from Noble (1g), Booth (1g-1a), and Augustine (1g-1a). McGrath and Kaley Mooney added the assists to the Miami goals. Anderson snagged the Eagles’ lone goal yet again, with Madison Shultz tallied the assist. Laura Noble made 41 saves in the loss from 44 shots on net.

The third star of the weekend goes to RMU’s Anderson (2g), second star belongs to Miami’s Noble (2g) and first star is the Redhawk’s Booth (4g-1a).

MICHIGAN STATE/DAVENPORT– The Spartans and the Panthers finished their first series of the season on Sunday (Nov. 22), with Michigan State ending things with a win and a sweep, 4-0. The four unanswered goals from the Spartans came from sticks of Oden (2g), Anderson (1g), and Scaturro (1g-1a). Alexis Smith (1a), Plancon (2a), Prisciandaro (2a) and Astor grabbed the apples on the goals. Hannah Johnson was in net for the win, grabbing 27 saves on 27 shots on net, gaining a shutout. Karley Ferguson was in net for Davenport, saving 65 shots out of a total 69.

Third star honors for the weekend for Adrian goes to Frey (1 GWG), second star is Rushing (2g-1a) and first star belongs to Dungey (50/52).

DAVENPORT/LIBERTY – The Panthers had a single exhibition game with Liberty University, and were taken down 8-1. Lexie Boydston grabbed the single goal for Davenport while Dawn Solo grabbed 32 saves from 40 shots on net.

END_OF_DOCUMENT_TOKEN_TO_BE_REPLACED

ADRIAN, MI – The Bulldogs of Adrian College and the Redhawks of Miami University knew going into the series this past weekend, that it was going to be two hard fought games, and neither team disappointed the fans. The series ended in a split after Adrian took the first win, 1-0, and Miami fought back to win the second game on Sunday 2-0.

Neither game had high scoring, which you wouldn’t expect since these two teams are powerhouses, but the goalies were the stars this past weekend. Game number one brought about even play as both teams couldn’t find the back of the net through two periods of play. Miami broke the stalemate in the third just about a minute in as Nicole Matthews and Jordan Hanson found Rachael Booth open for the first goal of the game. Kaley Mooney would put up an insurance goal for the Redhawks, 2-0, which is the score that would hold for the rest of the game. Adrian goaltender Alison Dungey was in net and grabbed 11 saves off of 13 shots on net, and Emalee Wills was the Miami goaltender and stopped 17 of 18 shots on goal.

On Sunday an early goal would lead to a black and gold victory after Jessica Rushing tapped in a goal with assists to Samantha Fortune and Valerie Twigg from Adrian. Alison Dungey stood on her head for the Bulldogs, stopping all 32 shots on goal, while Emalee Wills blocked 17 of 18 shots on net for the Redhawks.

Miami plays their next league game versus University of Michigan on October 23 while Adrian meets up with Davenport on October 29 and 30.

The seasons have started. Who will upset who in Division-1? Will the playoff champs, Miami University [D1], be champs back-to-back? Will there be upsets? Only the 2015-16 season will tell. ‪

The ACHA preseason rankings were released yesterday. Check out where our Division-1 teams landed on the list! 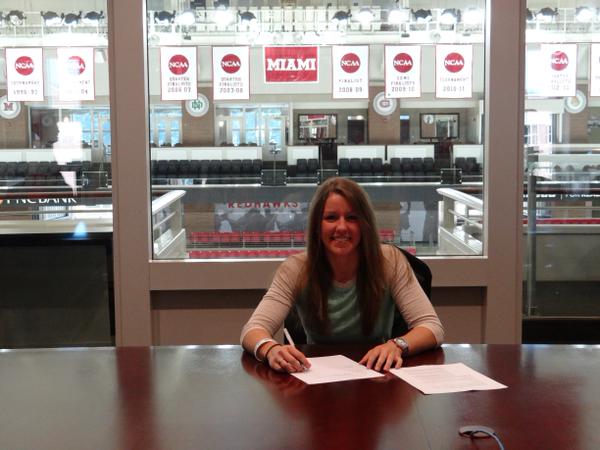