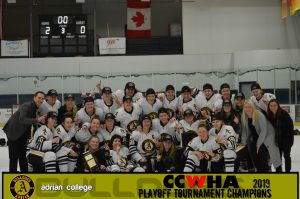 Friday night featured two games, first up, the No. 1 seed Adrian College versus No. 4 Miami University. The two old foes went to battle, with the Bulldogs holding the 1-0 lead after the first twenty minutes. Kaillie Hardy with the goal while on the power play from Brittany Levasseur and Katrina Robinson. Kelly Rae Zdan would grab back to back goals during the second period, one coming on the power play with help from Maddie Arnold, the second from the point unassisted. Hardy would put in her second goal, Adrian’s fourth, to end the second period of play, again on the power play. Sam Fortune and Kyleen Wilson with the helpers to secure the win for the Bulldogs. Miami’s Sara Gargasz would find the back of the net for the lone third period goal, for a 4-1 finish in the first game of the W1 tournament. Sarah Peterson and Katie Sciales would be credited with the assists on the Redhawk power play goal. Erin Sparks made 25 saves on 29 shots for Miami while Dana Colombo stopped 11 of 12 for Adrian in her first win of the weekend.

The second semi-final game had No. 2 Michigan State University facing off with No. 4 Grand Valley. The Spartans would begin with an early lead with the help of a goal from Maddie Wolsmann on the power play. Ashley Astor and Ava Gawley with the assists before Grand Valley would put in back to back goals before the end of the first. Rachael Smith and Taylor Lampar were the culprits of the Laker goals, with Monika Reaume grabbing an assist on the Smith goal, and Lampar’s tally coming short-handed. Amelia Schroder would find the back of the net to begin the second period for Michigan State, as her shot from the point would trickle in for the fourth total goal of the game. Morgan Graham would tally a goal on the next Spartan shift to regain their lead, a lead that they would hold onto for the rest of the game. Three unanswered goals later, from Wolsmann, Julia Lutz and Kendal Anderson would give Michigan State the 6-2 win to advance to the championship game. Emma Hembrough was in net for Grand Valley making 30 saves on 36 shots while Kathryn Hamer tallied the win with 33 saves on 35 shots faced.

The championship game would have a No. 1 versus No. 2 faceoff, as the Bulldogs would look to repeat as Tournament Champions against the Spartans. A single goal in the first period from Celina Clark would put Adrian ahead midway through the first, Erika McDonald and Tanya Candido with the assists. No scoring in the second due to competitive play and good goaltending, but Adrian would break the mold again with their second goal of the game, this time from Nicole Paradis to secure the shutout win. Colombo would record win two of the weekend to be crowned CCWHA W1 2019 Tournament Champions with 15 saves. Hamer was in net for Michigan State again, making 33 saves on 35 shots faced, which also earned her the 2019 Tournament MVP award.

The All-Tournament teams are as follows: 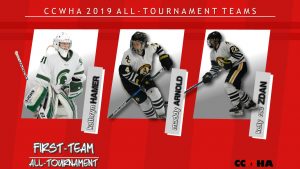 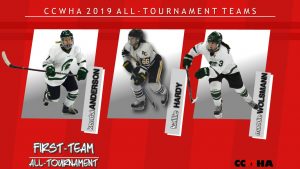 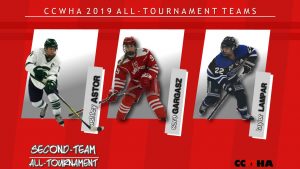