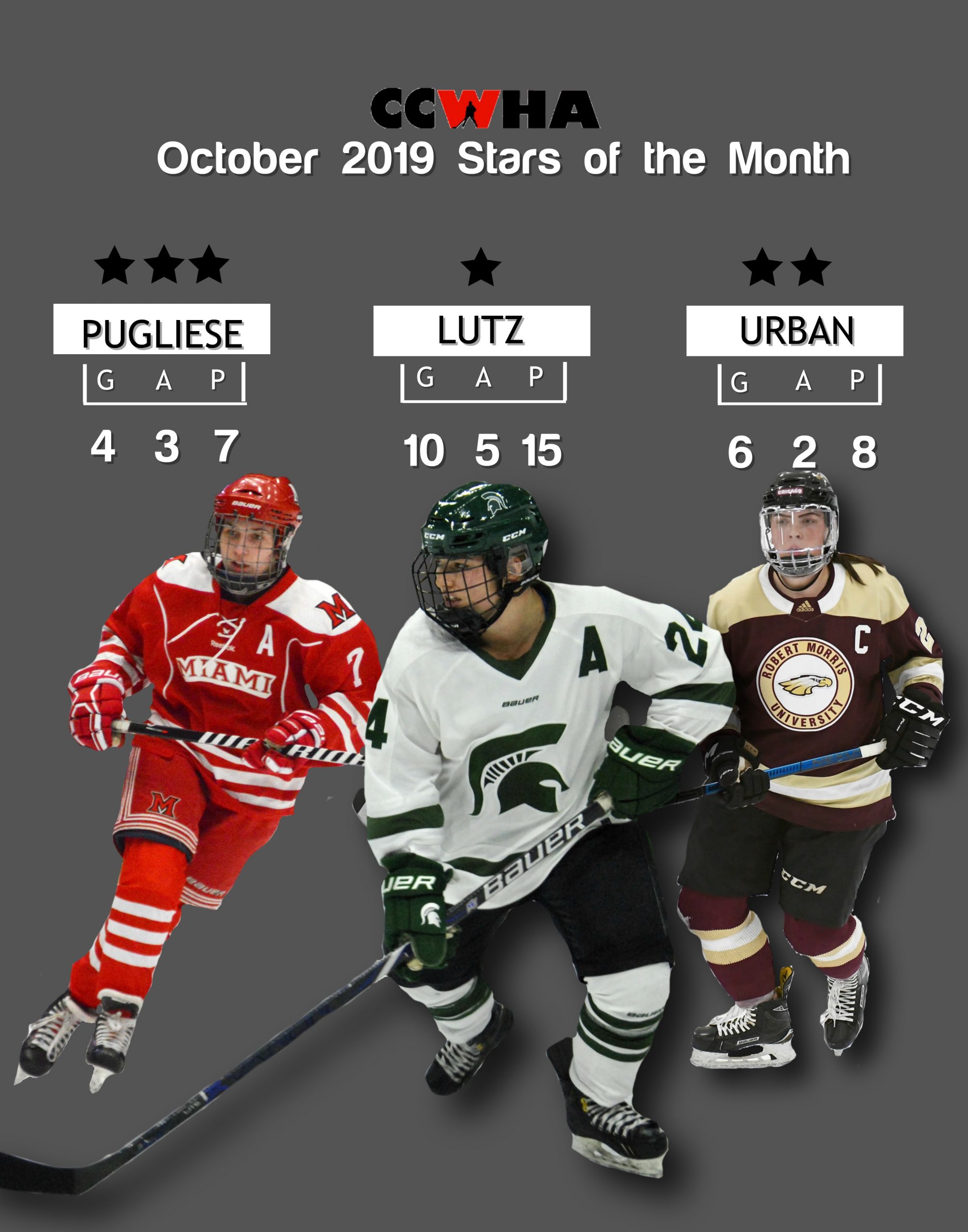 October Stars of the Month

The month of October held many games for the Central Collegiate Women’s Hockey Association teams. Throughout the month, many players shined bright, but three players stood out the most. These three standout players, from various CCWHA teams, have been named the October 2019 CCWHA Three Stars of the Month.

Miami Redhawks forward Amanda Pugliese has snagged the third star for the month of October after gathering seven points (4g, 3a) in six games during the tenth month. Pugliese began the month with a single goal during the 2-1 loss in the second game of the series with Lindenwood-Belleville. Pugliese would then help propel the Redhawks past the Wolverines in a 5-1 win with her two goals and two assists mid-way through October. To close out the month the veteran forward put up a goal and an assist in game one against Michigan State that ended in a 5-4 loss. Pugliese is the current leader in points for Miami with 12 points (5g, 7a).

Emily Urban of the Robert Morris Eagles earns the second star for October 2019 after tallying eight points (6g, 8a) in eight games. Colorado State came to Chicago for an exhibition series, where the Eagles recorded a sweep with two shutouts of the Rams. In the first 3-0 win, Urban had a goal and an assist while game two brought an 8-0 win for RMU and two goals for the forward. Urban would record two goals, one in each game, during the series against Grand Valley. The veteran would find a single goal in the 12-2 loss to Midland University and closed out the month with an assist in the 5-2 loss to Wisconsin. Urban currently leads the Eagles with 14 points (9g, 5a) this season.

The senior forward from Michigan State, Julia Lutz, is awarded the first star of the month for October 2019 after registering 15 points (10g, 5a) in six games. In the big 10-0 win over Grand Valley to begin CCWHA play, Lutz would find six points (4g, 2a) during the shutout win. The Spartans then flew to Colorado for non-CCWHA games where the senior forward would find four points in two games. Two goals put in by Lutz in game one which ended in a 5-2 loss, and two goals for a second time in the 8-1 win for a series split. Michigan State then traveled to Miami for two games, where Lutz would find two points in each game yet again. A goal and an assist in the 5-4 win, as well as the 3-2 win, rounded out Lutz’s 15 point month. With 23 points (15g, 8a) Lutz currently leads Michigan State in points this season.
____________________________
Author: Mackenzie McMahon, Communications Manager