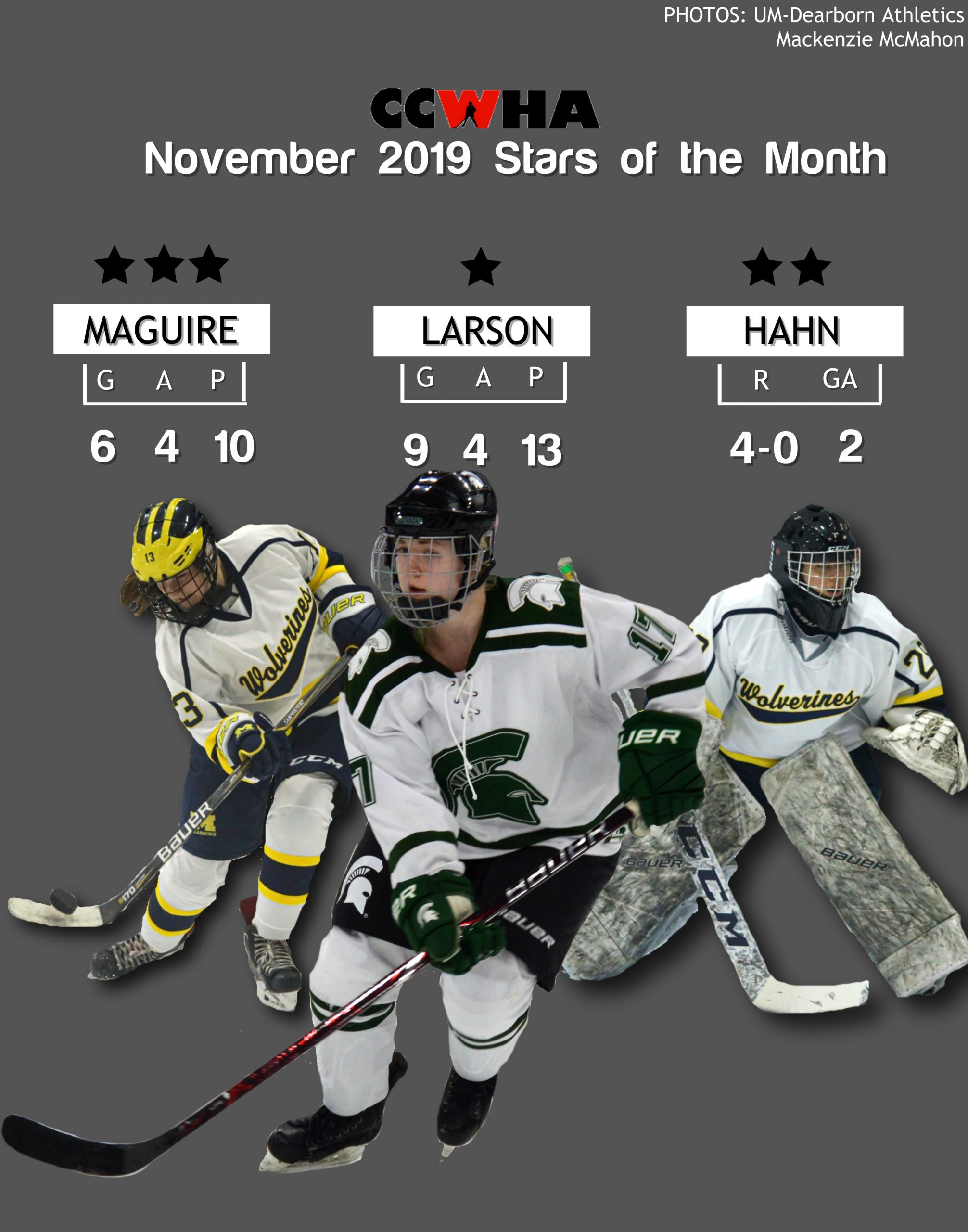 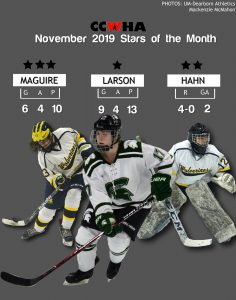 Claudia Maguire of University of Michigan-Dearborn is honored with the third star of the month after a six game, 10 point bout. The Wolverine led the way in November with six goals and four assists while the team went on a six game win streak. Maguire began November with a three point game (2g, 1a) in a 7-1 takedown of the D2 Adrian College Bulldogs. They would later complete that series at the end of the month where the forward would also have a multi-point game (1g,1a) in the 5-2 win over Adrian. The Wolverines took down the Michigan State Spartans in a two-game sweep where Maguire found four points (2g, 2a) within that sweep. The junior’s final points of the month came during a non-league game when Michigan-Dearborn took on Division 1 Davenport University. The Wolverines emerged with a win, 5-2, and Maguire with a single goal in the win. Currently at the top of the leaderboard for Michigan Dearborn, Maguire has tallied 21 points (13g, 8a) in 11 games this season.

Another University of Michigan-Dearborn product grabs the second star for November, goaltender Victoria Hahn. The first year netminder was between the pipes for four games in November going 4-0 and allowing just two goals. Hahn was in net for both of the sweeps for the Wolverines, against Michigan State as well as Adrian College. Two shutouts during the two wins over the Spartans, 4-0 and 3-0, where Hahn stopped all 12 shots in the 3-0 win, while shots were not recorded in the first game with Michigan State. Allowing just one goal in each of the games with Adrian College, Hahn stopped 18-19 shots in the 7-1 win, while making 16 saves on 17 shots on net in the 3-1 win over the Bulldogs. The freshman is currently 8-1-0 in nine games played this season, has only allowed 12 goals against and has made 153 saves for the Wolverines.

The first star of the month is awarded to Michigan State University’s Lauren Larson. With six games in November, Larson tallied 13 points (9g, 4a) while the Spartans went 4-2 for the month. Michigan State started off hot with a sweep of non-league member Concordia University where they swept the Cardinals with 11-1 and 9-0 wins. Larson put in four goals in the 11-1 win while she found a single assist in the 9-0 win. Two losses were tallied, with no goals found, as Michigan State fought against the University of Michigan-Dearborn. Ending on a high note for the month of November, the senior forward would put up two goals in the 9-0 win against D2 Miami of Ohio before registering six points (3g, 3a) in the 19-0 win to end the first half of the season. Currently Larson has dressed for 11 games and put up 16 points (10g, 6a) for Michigan State.