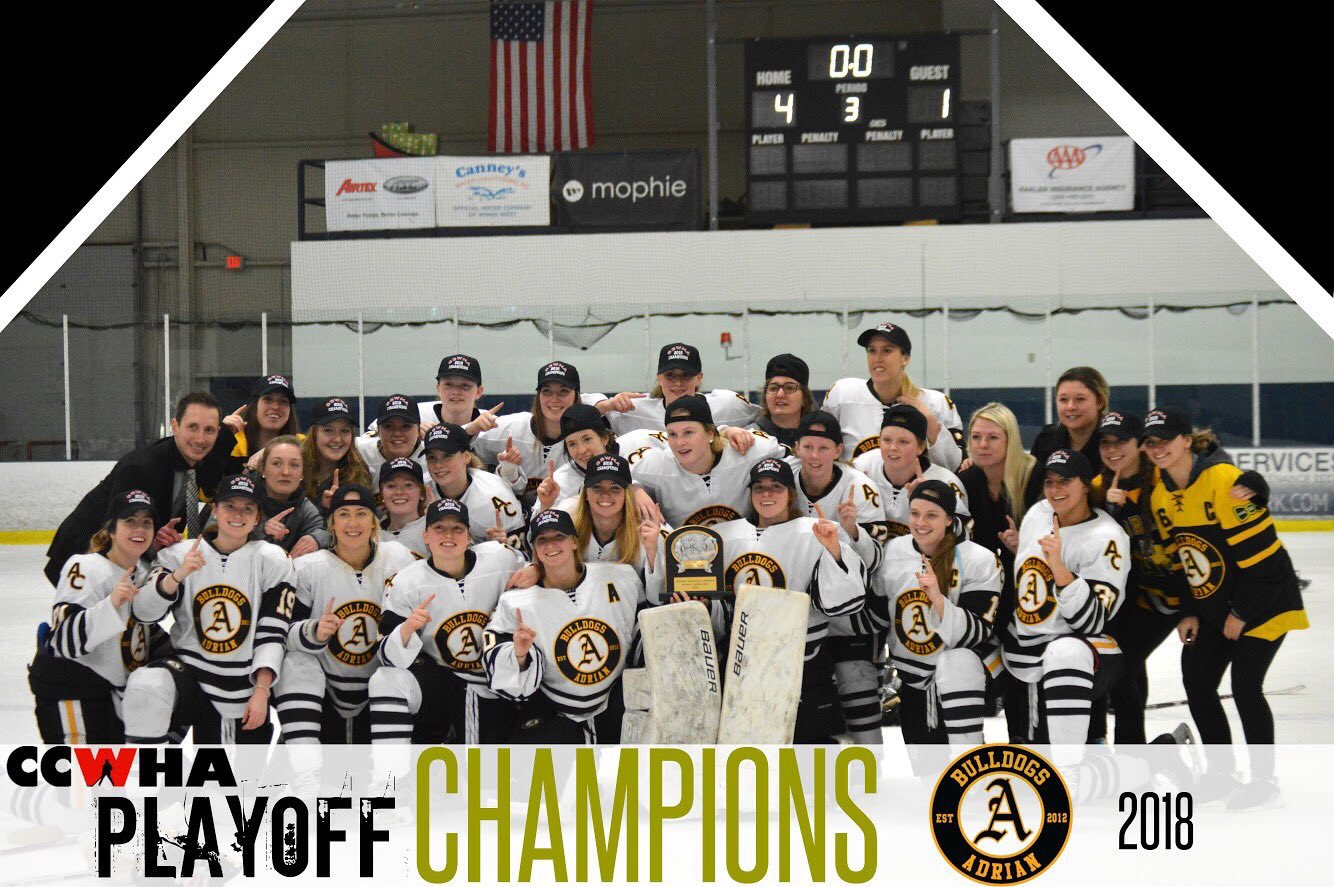 To start the 2018 playoffs, on Friday, February 23, the Grand Valley State Lakers took on the Robert Morris University Eagles. The Lakers took home the win, 6-3, with goals from Corey Robison (1g, 1a), Megyn Beebe (2g), Allison Carlson (2g), and Sally Hoerr. Three power play goals, and one short-handed goal for Grand Valley, and the helpers on the six goals came from Taylor Lampar (3a), Rachael Smith, Haley Keary, and Allison Lowe. The Eagle’s three goals were put in by Ali Sinnett, Makaila Anderson and Madison Schultz. The Lakers had Morgan Lang in net for their first win, who made 22 saves on 25 shots faced. Laura Noble was in net for Robert Morris making 13 saves on 19 shots on goal.

Next up on Friday night came the Miami University Redhawks matching up against the University of Michigan Wolverines. The two teams played through three score-less periods, forcing a playoff OT, where Emily Sloan would find the game-winner for Miami at the 2:54 mark into the fourth period. Alyssa Visalli and Ellen Chiligris would tally the assists on the GWG while Erin Sparks made 15 saves on 15 shots for the shutout OT win for Miami. Bailey Hamill made 29 saves on 30 shots on goal to force an extra period of hockey.

On Saturday, February 24, the semi-finals started off with Michigan State University, the No. 2 seed, taking on Miami, who advanced to the second  round of playoffs with a win on Friday. The Spartans took an early lead with help from Maddie Wolsmann who put in the only two Michigan State goals in the game. The first goal came with an assist from Matti Savich, while the second goal at the 6:50 mark was a result of a Wolsmann breakaway. A little over a minute later, Nicole Matthews would put Miami on the board for a 2-1 game after the first. Miami would put in two more unanswered goals to ultimately take the upset win over the Spartans. Amanda Pugliese added a penalty shot goal in the second, and Carly Noble put in a one-timer after a pass from Kathleen Baldwin in the corner. Erin Sparks was in net again for Miami, this time making 19 saves on 21 shots, while Hannah Johnson made 20 saves on 23 shots for Michigan State. Miami would move on, for the second time, to the Championship game on Sunday.

Saturday’s second game had Grand Valley State in their second game of the weekend, against Adrian College, the No. 1 seed in the 2018 playoffs. A single Bulldog goal in the first came from Nicole Paradis to give Adrian the lead after the first. Jessica Harrison credited with the assist.Allison Lowe tied things up at 6:54 in the second with a Grand Valley goal after a pass from Allison Stapleton. However, Jessie Rushing took back the lead for Adrian with a goal just 24 seconds into the third period. Olivia Ziemba and Danica Polson with the assists on the go-ahead goal for the Bulldogs. Kaillie Hardy would secure the win with a third Adrian goal at 8:57 in the third with help from Sam Fortune. In net for Adrian was Alison Dungey who made 13 saves on 14 shots. Lauren Allen saw time in goal for Grand Valley, making 23 saves on 26 shots faced. Adrian College would advance to the championship game on Sunday with their win over Grand Valley.

The 2018 CCHWA Playoff Championship game would see the Miami University Redhawks face off against the Adrian College Bulldogs. Brittany Levasseur would start things off for scoring, with a goal for the Bulldogs at 2:24 in the first period. Tara Wrbelis and Kaillie Hardy with the assists. Nicole Paradis would find the back of the net twice in a five minute span to give Adrian a 3-0 lead over Miami, with two periods of play still left to play, both goals had assists from Hardy. Olivia Ziemba found her second goal of playoffs in the second period with help from Courtney Hoke and Danica Polson. Halfway through the third period of play, the Redhawks got on the board after Alyssa Visalli tipped in a shot from Carly Noble to make it 4-1. The Bulldogs would hold onto their third period lead for the win, their first CCWHA Playoff title. Erin Sparks was in net for the third time for the Redhawks, making 39 saves this time on 43 shots on goal. Alison Dungey was between the pipes for Adrian for the championship win, stopping 14 of 15 shots faced. Nicole Paradis would snag the Tournament MVP title, with three goals in two games, and the Bulldogs picked up an autobid to the ACHA National Tournament in Columbus, OH in March.